Photodynamic therapy (PDT) is an effective anticancer treatment, which relies on three intrinsically nontoxic components: photosensitizers (PSs), light, and tissue oxygen. PSs absorb light energy when irradiated by the light of an appropriate wavelength and excite oxygen (O2) to reactive oxygen species (ROS) such as singlet oxygen 1O2, hydroxyl radical ·OH, and anion radical ·O2−. By localizing both the PSs and the light exposure to tumor regions, PDT can selectively kill tumor cells by ROS while preserving surrounding normal tissues. It can see that PSs are play a key role in PDT. Porphyrin and its derivatives are the most commonly used PSs for PDT, but they have poor solubility and easily aggregate in cellular environments, limiting the efficacy of PDT in the clinic. Therefore, there is an ongoing need for effective delivery of PSs to tumors to improve the therapeutic effects of PDT. MOFs and COFs have been proved to be a promising class of materials for PDT, their structural regularity, design flexibility, and good biocompatibility easily make photosensitizers graft directly on their structure, which could avoid aggregation, thereby achieving enhanced therapeutic efficiency. On the other hand, the structural design and modification of MOFs and COFs can tune the light absorption and electron transition pathway for improving the efficiency of ROS generation or temperature increase. 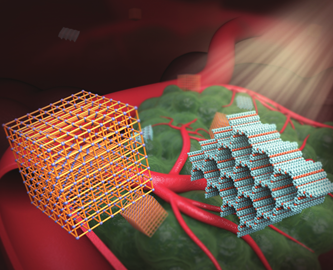 Fig.1 MOFs and COFs as photosensitizers in PDT

Irradiated by light, a PSs is first activated from the singlet ground state (S0) to the singlet excited state (S1). The PSs at the S1 state can undergo three different processes: decay to the ground state to generate fluorescence, vibrational relaxation to generate heat, or intersystem crossing to the triplet excited state (T1) through a change in the electron spinorientation. After intersystem crossing, the PSs in the T1 state can either decay to its ground state through emitting phosphorescence or exert PDT effects by reacting with nearby triplet state molecules, particularly molecular oxygen (3O2), via a Type-I process to generate radical species, including superoxide anions (O2−), or a Type-II process to generate 1O2. Most PDT treatments are believed to go through the Type-II process. The 1O2. and O2− can the kill tumor cells[1]. 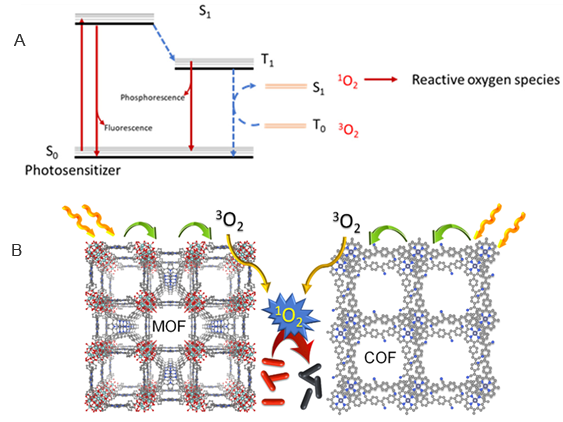 Application of MOFs in PDT

Integrated with photosensitizers on the organic linkers or using photosensitizers as MOF ligands are the straightforward way to fabricate intrinsic photodynamic MOFs, where porphyrin and its derivatives are the most frequently. The frequently-used porphyrin ligands are presented in Fig.2. For example, in 2014, Lin and coworkers first applied MOFs nanoparticles as photosensitizers in PDT. They constructed a UiO-type MOF, DBO-UiO, from 5,15-di(p-benzoato) porphyrin (H2DBP) cores and Hf-oxo clusters. The nanoparticles of DPB-UiO were able to generate twice the 1O2 as the ligand alone under the same conditions. In vivo tests manifested the excellent antitumor effect of DBP-UiO, i.e., the tumor decreased in size by 50 times, or was completely eradicated after PDT treatment. To further enhance the PDT efficacy, Lin and coworkers replaced the porphyrin core with a chlorin core and constructed a similar MOF, DBC-UiO [DBC = 5,15-di(p-benzoate) chlorin] (as shown in Fig.3), DBC-UiO exhibited 3-fold higher PDT efficacy and even more potent tumor eradication than DBP-UiO[2]. 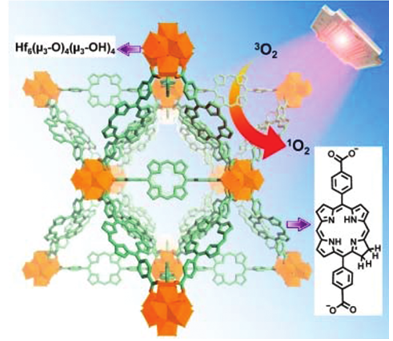 Application of COFs in PDT

Since COFs are made of organic building blocks through covalent bonds, some unbonded functional groups on the COF matrix may exist, enabling further conjugation of organic photosensitizers onto the COFs. As a carrier of PSs, COFs can significantly improve their cellular endocytosis and bioavailability through nanometerization, thereby improving their therapeutic efficacy against cancer. Guan et al. reported two boron-dipyrromethene (BODIPY)-loaded nanoscale COFs (NCOFs), which were synthesized using Schif-base condensation of the imine based NCOFs with the organic photosensitizer BODIPY. The NCOFs shows good performance of PDT with low dark toxicity, high phototoxicity, and high tumor treatment efficiency[3].

Alfa Chemistry provides all kinds of high-quality MOFs and COFs for the photodynamic therapy and our professional technology team that can also provide customers with specialized MOFs and COFs design and customization services. No matter what design ideas you have, we will implement them together with you. In addition, Alfa Chemistry is committed to supporting customers a series of solutions in photodynamic therapy by using MOFs and COFs. Please contact us immediately to order or cooperate in research and development with high quality and reasonable price.